A fascinating Chap Goh Meh legend tells the tale of a lonely young bachelor, who during an outing on this moonlit night, was suddenly enchanted when he caught a glimpse of the most beautiful girl he had ever seen. Who was this exquisitely delicate beauty driving by in all her finery, he wondered? With excitement pounding in his heart, the hopeful young man quickly jotted down the number of the car she was in, lest he forgot.

The very next morning, he made enquiries about the owner of the car and persevered until he finally obtained the address. With great enthusiasm, he requested for his mother to send a matchmaker to the home of the girl he envisaged marrying. The matchmaker was successful in carrying our her duties and the young man was thrilled to bits. Little did he realise that the girl he had so madly fallen in love with was not the daughter of the house owner but rather, a visiting niece. So on his wedding day, the utterly dumbfounded groom found out a little too late, that instead of the radiant smile of the gorgeous beauty he was expecting, he had wed her very plain-looking cousin who was on the plump side. The story however did have a happy ending since, as his wife was wealthy, they managed to live a comfortable and fulfilled life.

Chap Goh Meh goes by a few names. In Mandarin, it is called Yuan Xiao but in Hokkien, common among Penangites, "Chap Goh Meh" means "the fifteenth night". During this auspicious occasion, Chinese homes are brightly decorated with lights and lanterns are hung over balconies or main entrances. Prayers are offered in the morning to family members who have passed on as well as to ancestors who have long been gone.

One particular sweet dessert the Nyonyas will cook on this day is pengat. The dish, consists of a medley of sweet potatoes, taro, tapioca flour jelly, sago and caramelised bananas in a sweet coconut cream gravy flavoured with aromatic pandan (screw pine) leaves. Some would add black-eyed peas.

Bubur cha cha, on the other hand, has similar ingredients as pengat sans the bananas. However, if you ask different people, they would give you different definitions of the two. In some recipes, you do not have black-eyed peas in pengat, which you could have in bubur cha cha. To me, the ingredients in a dish should harmonise well, offering balanced flavours and exciting textures. We must stop listening to hardcore traditionalists and not be shackled by their beliefs. Thus I would add, anything goes, according to your own desires. Be adventurous and you could be pleasantly surprised by new discoveries. This is something the Nyonyas have always prided themselves on – their ingenuity and willingness to experiment with flavours – leading to their culinary prowess.

As "cha cha" is a homophonic with the Hokkien "che che" (meaning "abundance"), it is a dish synonymous with unity and happiness in abundance.

This would also be the last day to toss yee sang among family and friends. The "prosperity toss" usually consists of a mixture of finely shredded vegetables topped with strips of raw fish and a variety of sauces and condiments. Using chopsticks, diners would toss the shredded ingredients into the air while ushering in various "auspicious wishes" aloud. Not only is this dish a symbol of good luck, prosperity, health and all things auspicious, yee sang should also be tossed with great enthusiasm as the height of the toss reflects the growth in fortunes.

Various activities would take place to mark this very special day – the Dondang Sayang musical entourage serenading classic songs and "pantuns" (Malay poems) as well as a tangerine-throwing ceremony, are usually held at Gurney Drive or the Esplanade.

Dondang Sayang, literally meaning the lullaby of love, is an interplay of sung poetry, usually revolving around the theme of love, between a man and a woman; each tries to outwit the other in the name of affection, accompanied with traditional musical instruments.

The State Chinese (Penang) Association has annually celebrated Chap Goh Meh with various activities organised including a gala dinner on the eve and on the day itself, a Dondang Sayang musical float and traditional Nyonya dance performances at designated venues. The Penang State government would also join in the merriment with chingay and lion dance performances and at times, with live concerts and street food galore as well.

In the good old days, Chap Goh Meh was among the very few occasions where eligible young ladies, adorned in their finery, were allowed out from the confines of their homes. A young maiden (or spinster) would throw her tangerines into the sea as a gesture of hope to wed a good husband. From afar, eager bachelors could only admire and ogle the passing beauties, as they were always accompanied by an entourage of the fiercest-looking aunts and amahs! Matchmakers would then be dispatched and if successful, a union would follow suit.

To keep this quaint tradition alive in modern times, the tangerine-throwing event has transmogrified into a competition of sorts, where the tangerines thrown into the sea by girls (single or otherwise) would be scooped up by boys in boats. The boat with the most oranges would be declared the winner. The pursuit of love and marriage has entirely dissipated, leaving us only a reflection of the romantic past.

PS: In 2021, where lockdowns and social distancing have been a new normal 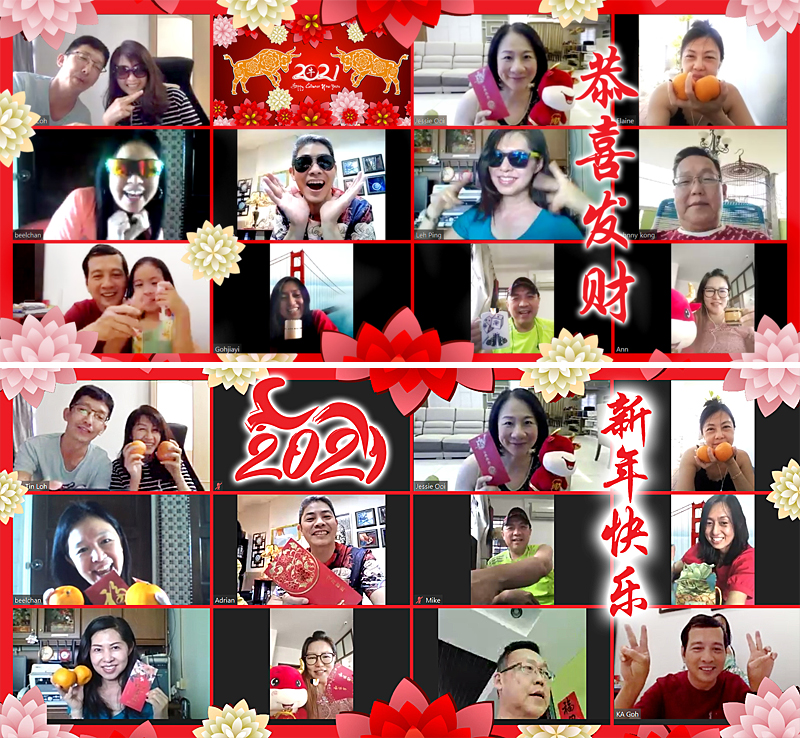 Although Chinese New Year this year has been different, it should not stop us from spending quality time with our loved ones, both near and far. Aided with technology, this is made possible with Zoom Meeting and WhatsApp. It was wonderful to be able to see familiar faces and join in an active conversation with love ones, some continents apart. My niece in Australia was also able to partake in a card game hosted in Penang.