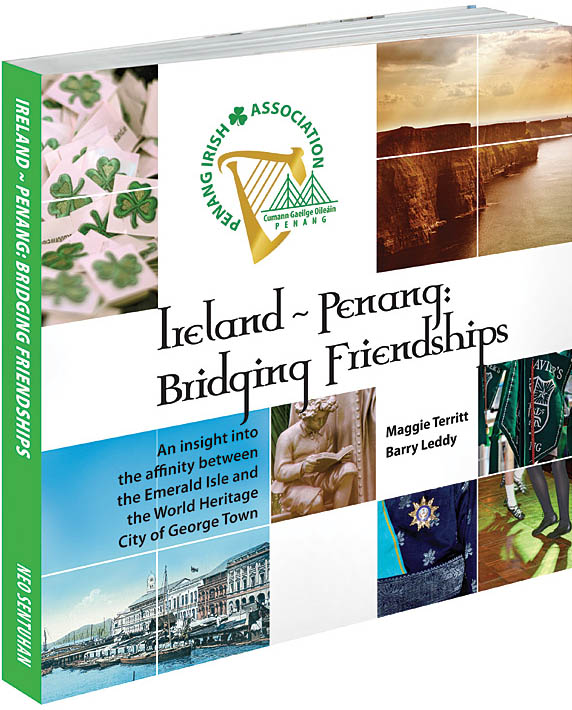 They came, as long ago as the mid-ninteenth century from all parts of Ireland, the Emerald Isle, with exotic names like Clare, Laois, Cork, Mayo, Mallow, Antrim and Tipperary. They numbered among Penang’s first overseas settlers and during long voyages by sea, suffered untold hardships. Some came for fame and fortune, some simply for the adventure, but many did so, fired by their desire to help open up unknown parts of the “new world” and to impart both their knowledge and faith.

The Irish have thus bestowed valuable legacies treasured over time and posterity. They made an impact, winning local hearts and moulding their talents, giving them direction and a promising tomorrow.

Their stories are worth talking and reading about, time and again.

8. Postcards on memorable sojourns and stopovers - 117

Acknowledgements - 135
Similarities between Ireland and Penang - 136

Maggie Territt, President of the Penang Irish Association (PIA) is from Portlaoise in Co. Laois. She arrived in Penang in 1999 via West Africa and India. Maggie has been involved globally in expatriate organisations. She was the co-author of FoodFriends’ Gourmet Secrets published in 2007 and writes food related articles for magazines in Malaysia. Maggie has fulfilled one of her longtime dreams of running a restaurant, this being Uncle Albert’s in Penang together with Liam Healy. She also enjoys organising food and wine events for the FoodFriends group. In addition to the PIA and Uncle Albert’s, Maggie’s passions also include golf, bridge and all things Irish.

Barry Leddy, Vice President of the PIA is from Sandymount in Dublin. He moved to Penang in 2010 with his wife Shareen and their two children, Mahon and Amreeta. He is the CEO of Barry Leddy Developments and is a keen sports follower. Barry plays football in Penang and has also a great interest in music.

“Ireland – Penang: Bridging Friendships”
An insight into the affinity between the Emerald Isle and the World Heritage City of George Town

The annual St. Patrick’s Festival in Penang will see the launching of Maggie Territt and Barry Leddy’s book entitled ‘Ireland – Penang: Bridging Friendships’. Territt, who is Penang Irish Association president, said the book co-authored by Leddy was about Penang’s first overseas settlers who suffered untold hardships during long sea voyages. “Some came for fame and fortune or adventure while others did so because of their desire to help open up unknown parts of the ‘new world’ and to impart both their knowledge and faith...

The book was launched at the St. Patrick’s Ball at E&O Hotel on Friday, 6th March 2015 by Maggie Territt and Barry Leddy. Armed with hammers, the co-authors chiselled through a block of ice to set free the encased book.

Prior to that, they held a press conference announcing the launch of the book. At the press conference, the Irish Ambassador to Malaysia, H.E. Mr. Declan Kelly said, “I’m very proud and happy that Maggie and Barry have written an amazing book on how the Irish have bestowed valuable legacies treasured over time and posterity. How they have made an impact, winning local hearts and moulding their talents, giving them direction and a promising tomorrow.”

Top photo: Book designer Adrian Cheah (in a sunrise collage-print shirt) having a ball among friends.

The book was officially launched by the YB Lim Guan Eng, the Chief Minister of Penang at the St. Patrick’s Festival on Saturday, 7th March. In his speech, he said, “The stories of the lives of many Irish people who have lived, loved and died in their ‘Beloved Penang’, are told affectionately in the book. Their stories are worth talking and reading about, time and again.”

The following have helped us in the preparation of the book and we are grateful for their contributions and assistance. The idea of writing a book on the Irish influences in Penang since 1798 came from the timeline exhibition Penang & Ireland: Friends for Generations showcased during the St. Patrick’s Festival in 2014.

Sinead Ahistrand Pederson, a committee member and Adrian Cheah from Neo Sentuhan, dedicated a great deal of their time in researching and compiling the timeline.

Adrian Cheah reveals his professionalism and talent in the design, writing, photography and publishing of this book. He gave us the initial guidance for the book and inspired us all the way. He has worked with, and has been invaluable to, the PIA since the beginning.

Our editor, Josephine Choo for her help in creating a structure to the book, meeting our deadlines and ensuring that the book is near perfection. This is the second collaboration between us and a rewarding one... 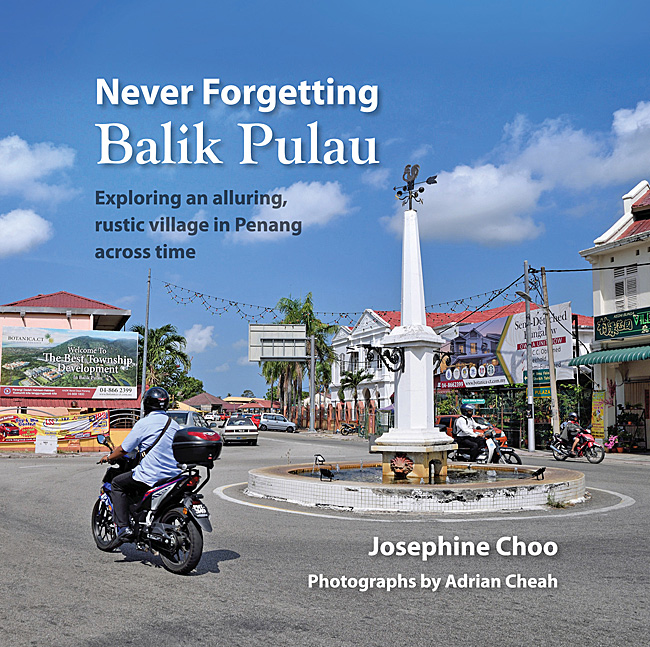 Click on the cover to find out more about the book. 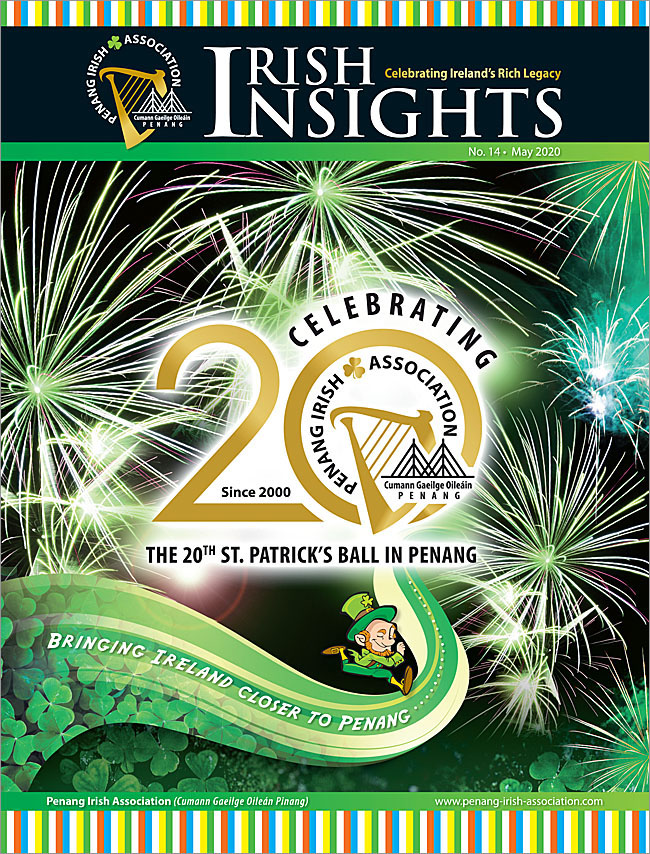 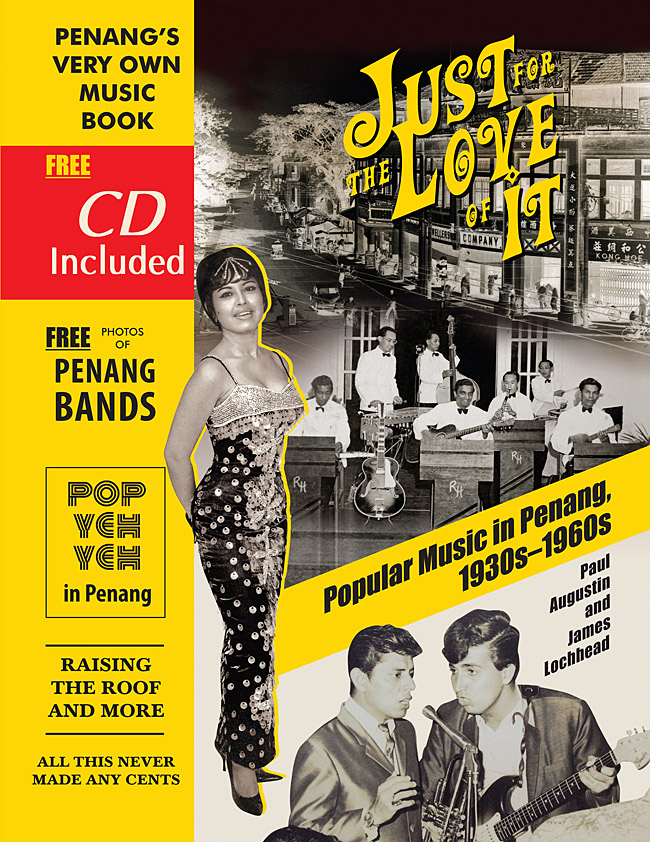 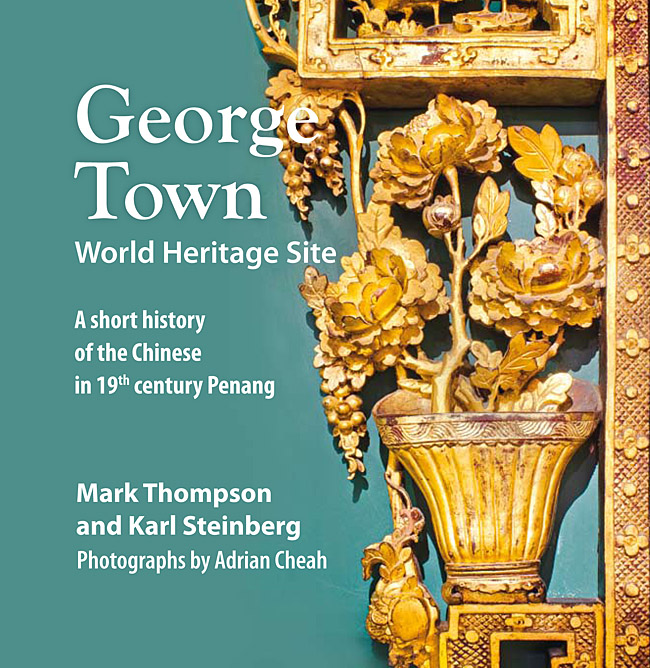