The journey of faith – the Haj

Hari Raya Haji (or Hari Raya Korban) falls on the 10th day of Zulhijah, the last month of the Muslim calendar. It is a major Islamic festival and of particular significance for pilgrims who have returned from performing the Haj or umrah (pilgrimage) in Mecca. It may not as grand as Hari Raya Aidil Fitri (or Hari Raya Puasa) in terms of joyous celebration, but is important nonetheless for Muslims the world over.

The pilgrimage to Mecca

For 14 centuries, Muslims from around the world have embarked on the Haj, between the eighth and the 13th days of Zulhijah.

This pilgrimage to the holy places in and around the holy city of Mecca (the birthplace of Islam) is one of the five pillars of Sunni Islam and one of the ten Branches of Religion in Shi'a Islam.

It is also a compulsory obligation for all Muslims who are able bodied and with the financial means to perform the pilgrimage.

The Haj is a gruelling journey comprising several tasks which include the tawaf, or circling the Ka'aba (towards which Muslims turn during daily prayers). Pilgrims must also re-enact Hagar's (the wife of Abraham) frantic search for water by walking seven times back and forth between the hills of Safa and Marwah. Then they travel to the hill of Arafat and stay there from afternoon until sundown in prayer and contemplation. From Arafat, pilgrims travel to Mina, a city just outside of Mecca, and participate in the ritualistic stoning of the devil. This requires collecting some 70 pebbles from the ground on the plain of Muzdalifah. The Haj is concluded when pilgrims perform a second tawaf around the Ka'aba.

After the pilgrims complete the Haj, the men are 'bestowed' with the title Haji, while the women are called Hajjah. Muslims can perform the Haj as many times as they wish.

The morning of Hari Raya Haji

On the first day of Aidil Adha, prayers are held at the mosque in the morning. Some would visit the graves of their dearly departed. After prayers, pilgrims new and old will open their doors to visitors, and serve them with food, drinks and sweets. Visitors usually comprise close friends, fellow pilgrims or family members.

Hari Raya Haji is also marked by the sacrifice of either a goat, lamb or cow. An individual or a family will donate the sacrificial animal, and Muslims from a particular community will gather in fairly large numbers to help out in the slaughtering and distribution of the meat. Recipients include the poor and destitute and other Muslims. One-third is reserved for the family or individual who donated the animal. It should be noted that sacrificing an animal during this festival is not compulsory but more of an obligation to those who can afford it.

The Muslim ritual or sacrifice traces its origins back to the Prophet Abraham and his sacrifice of Ishmael, as a test of his devotion to the Lord. Because Abraham did not hesitate, Ishmael was spared and in his place was a ram, which Abraham then sacrificed.

Early days of the Haj in Penang

If there's a part of George Town that is identified with early Haj activities, then it must be Acheen Street. According to Universiti Sains Malaysia lecturer, Dr. Ghafar Ahmad (who was behind the restoration of the Acheen Street Mosque and Fort Cornwallis) among the thriving activities in the historic Acheen Street was the management of haj pilgrimage trips. 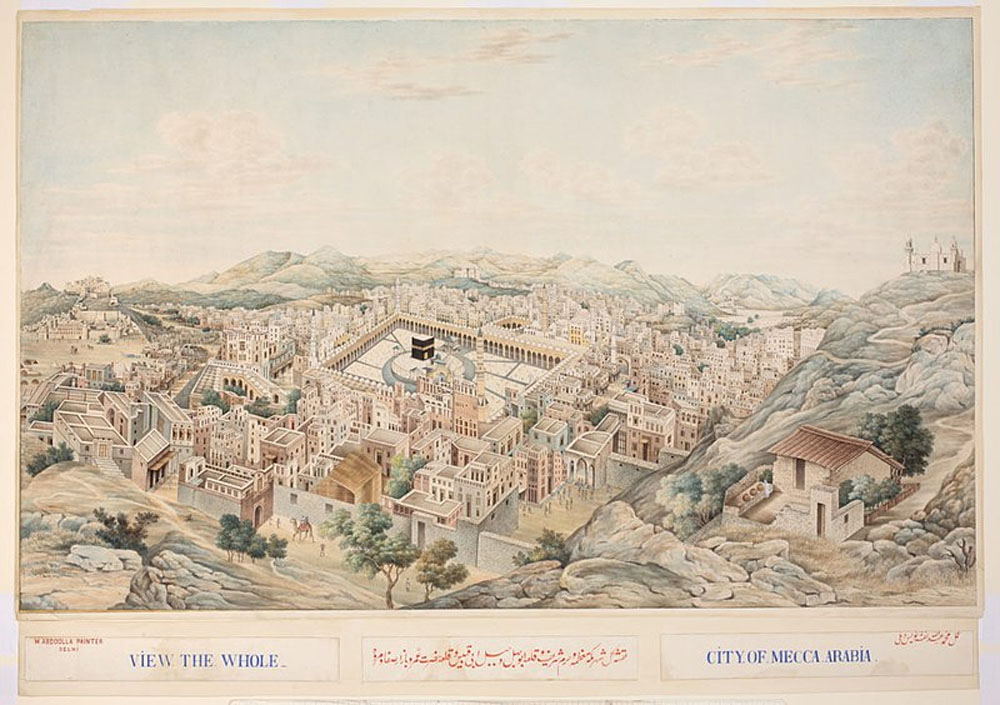 Panoramic View of Mecca, Mecca, Saudi Arabia, 1845. From the Nasser D. Khalili Collection of Hajj and the Arts of Pilgrimage. Source: https://www.nasserdkhalili.com/the-eight-collections-2/

So popular was the pilgrimage bookings and activities that Acheen Street was known as the Second Jeddah – every year "hundreds of pilgrims from around the country, Indonesia and Thailand would gather here to board the Blue Funnel Line ships rented from the British-owned Mansfield & Co." recalled Ghafar.

The early foreign Muslims who eventually settled here eventually became part of the rich fabric that made up the Muslim community in Penang.

Haj management activities came to a standstill during World War II, resumed in 1949, and finally came to a complete halt when the Tabung Haji (Pilgrim Management and Fund Board) was set up in the early 70s. The Board, a merger between the Pilgrims Fund Corporation and the Penang-based Pilgrimage Affairs Management Office, in 1969, was set up to help prospective pilgrims save up for their Haj expenses. The Board's responsibility also includes the welfare and safety of pilgrims during the Haj.

As Muslims look at earthly life as a preparation for a greater journey, so the Haj is a spiritual journey that brings Muslims closer to God. Ideally, they return with a deeper and renewed understanding of what it means to be a Muslim, an awareness of their rich heritage and legacy, and a sense of humbleness and awe.

Zakaria Salim and his wife Amilia made their Haj journey in 2017. In 2019, Zakaria returned to Mecca with his entire family including his parents for their umrah. He believes that a family that prays together, stays together.