Kinkaku-ji, also known as the Temple of the Golden Pavilion, has been through devastating fires in the past. Although it managed to survive the ravages of the Onin War (1467–1477), it was engulfed in the fire of 1565. Kinkaku-ji was then rebuilt in the 19th century and restored to its full splendour.

However, in the wee hours of the morning on 2 July 1950, Hayashi Yoken, a 22-year-old acolyte set it ablaze, razing it to the ground.

Yukio Mishima, one of the most important Japanese authors of the 20th century in his 1956 novel, "Temple of the Golden Pavilion" captured the tragedy brilliantly. He surmised that the acolyte was driven to destroy the pavilion because of its perfection: "When people concentrate on the idea of beauty, they are, without realising it, confronted with the darkest thoughts that exist in this world. That, I suppose, is how human beings are made."

The real reason that drove Yoken to perform such a horrendous crime is left for debate. Yoken then attempted suicide but survived. He was subsequently taken into custody and sentenced to seven years in prison. Due to mental illness, he was released in September 1955; however, the following year in March, he died from tuberculosis. 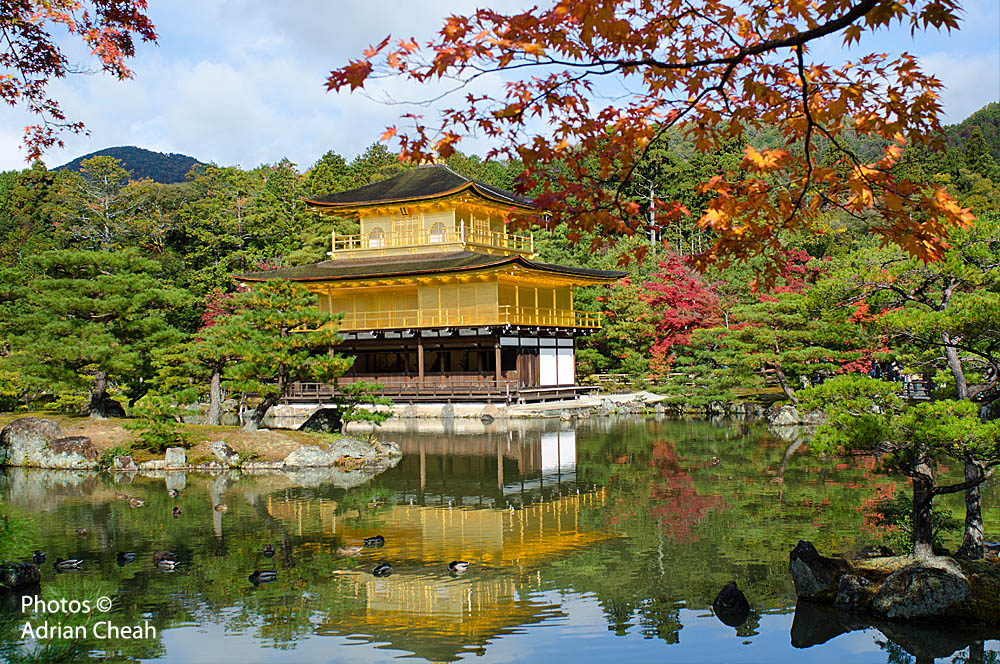 The laborious rebuilding of the exact replica took five years to complete and the magnificent wonder of Japanese architecture was once again open to the public. Like a phoenix, Kinkaku-ji rose from the ashes, radiating all its splendour. In 1984, the pavilion was spruced up and three years later, it was gilded a thicker layer of gold foil, making it even more resplendent.

Located in the hilly Kitayama district of northwest Kyoto, Kinkaku-ji's humble beginning dates back to the 1300s. Saion-ji Kintsune (1171-1244), a Kamakura-period court noble and poet had built a villa for his private use in the district. Shogun Ashikaga Yoshimitsu (1358-1408) then purchased the villa and the land from Kintsune's family and in 1397, completed building his own villa which he called Kitayama-dono. Thirteen buildings were added to two Shinden-style palaces and a pavilion, all to impress the emperor upon his visit in 1407. This complex, the gardens and architecture focused around a central golden pavilion, was said to evoke paradise on earth.

Yoshimitsu was also a great patron of the arts and Kinkaku-ji witnessed a flourishing of artistry in sword-making and ceramics as well as performing arts.

Yoshimitsu's sudden death on 31 May 1408 at 49, four months shy from his 50th birthday, left behind 11 concubines and 16 children. He served as Shogun for nearly 25 years until 1394 before handing over the reins to his son, Yoshimochi. If you stop for a moment and do some calculation, something is not quite right. Well, Yoshimitsu’s father (the second Shogun) Yoshiakira, died of illness when his son was only ten. Months later, Yoshimitsu was invested as Shogun when he turned 11. Thus, from 11 till 36, Yoshimitsu was the third shogun and enjoyed 13 years of retirement after his service.

Kinkaku-ji's undoubted splendour has made it one of the most popular buildings in Japan. It exemplifies several different Japanese architectural styles, with extensive serene gardens that are beautifully manicured. Yoshimitsu infused various Chinese-inspired elements into the pavilion and gardens as well (note the pine-covered islets in the pond).

My family and I visited Kinkaku-ji when we were in Kyoto in the fall of 2012. We entered through the Chumon gate and walked along a pretty path shaded by ancient pines and maples, ablaze with vibrant hues from golden yellow to fiery reddish-orange. 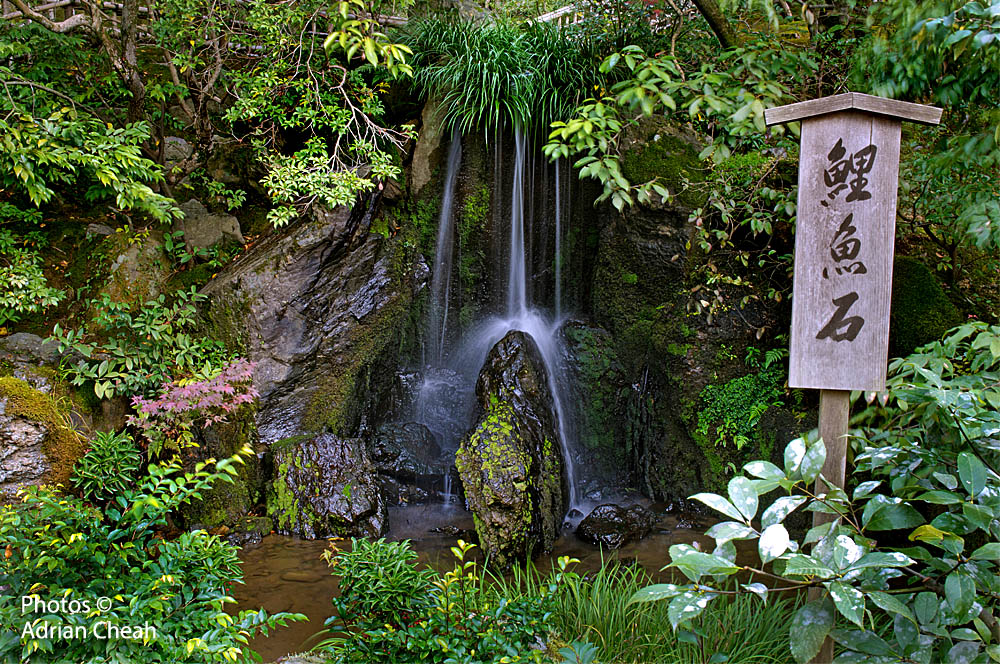 Although the interior was closed to the public, it was possible to discern the presence of statues of the Buddha as well as Yoshimitsu on the ground floor. On this floor, there is a front viewing area, a verandah as well as a rear fishing deck. Its walls are made of plain wood and white plaster. 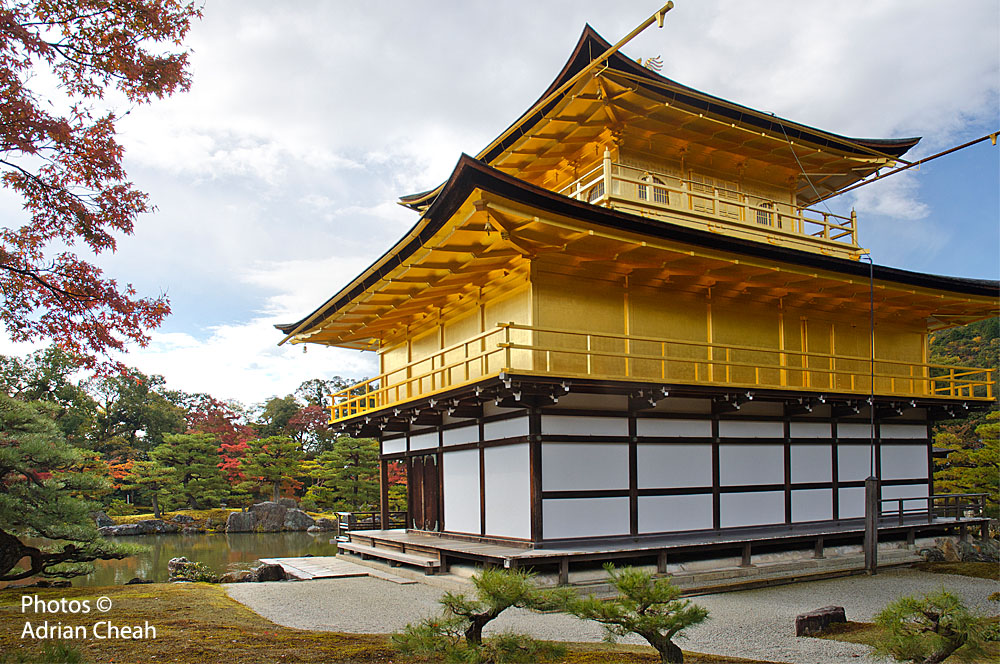 Online research tells me that the middle floor houses the Buddha Hall, a space allocated for meetings. It also contains a shrine to Kanon, the Bodhisattva of mercy and compassion. I would have loved to be in the hall to see firsthand the ceiling and walls, decorated with painted birds, clouds and musical instruments.

The third and top floor of the pavilion has bell-shaped windows and is lavishly decorated with sacred relics of the Buddha. Both the second and third-floor exteriors are built of lacquered wood gilded with gold leaf.

The roof of the pavilion has a pyramid form and is covered in shingles of hinoki wood; it once had gilded Chinese tiles to match the sheen of the upper two stories. The roof apex has the shimmering figure of a phoenix, a symbol of divine favour, virtue and harmony. Serendipitously, the phoenix, perched on the roof of the pavilion, survived the devastating 1950 fire because it was being repaired at the time. 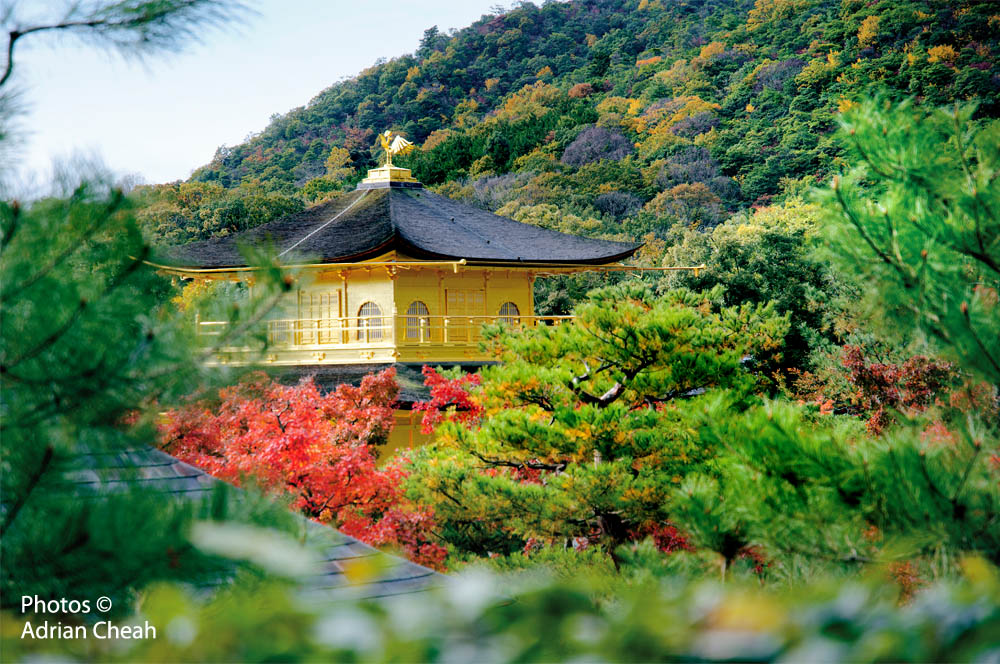 In Penang, the mythical phoenix motif is evident in all things Peranakan as well. From elegant rosewood furniture with mother-of-pearl inlay to elaborate beaded slippers and from gossamer-like embroidered kebayas to dazzling Peranakan jewellery, the phoenix caught in various positions is everywhere. Obsessed by the phoenix's beauty and symbolic representation, the Nyonyas uses the leitmotif of this mythical entity of flight to remind us of the transformative quality that lies within each and every one of us, challenging all to evolve and reinvent ourselves. As a distinct matriarchal figure of peace, prosperity and happiness, this never fails to exude beauty and grace.

My life is filled with beautiful and lavishly embellished Peranakan items, thanks to the inventive culture I was born into. The next time I use one of my rose-coloured porcelain plates, I will take a closer look at the mighty phoenix echoing its silent call to burn off the negative old self and arise with new possibilities, just as Kinkaku-ji has done via its illustrious legacy.

Kinkaku-ji was designated as a UNESCO World Heritage Site in 1994 and is an official National Special Historic Site of Japan as well as being listed as a Special Place of Scenic Beauty.

PS: Many thanks to Higa-san and his family for the warm hospitality and the golden memories of Kyoto to cherish a lifetime over.