I visited Galle Fort twice, once in 2011 and another in 2015. Built in 1855 by the Dutch, the 130-acre fort is one of Sri Lanka's most prominent World Heritage Sites. Located at the bay of Galle on the southwestern coast of the island, it has retained its charm and beauty even after going through dramatic changes in history – invasions, battles, colonisations, terrorist attacks, plagues and even a tsunami.

In 2011, I had the opportunity to design a book on Galle Fort entitled "Galle Fort, World Heritage Site – a visitor's guide and illustrated walking tour". It was written by Mark Thompson and Karl Steinberg. Karl also photographed all the necessary images for the book. Via the convenience of technology, we managed to coordinate everything online with me being in Penang and Karl as well as Mark in Galle Fort. After months of hard work, we dotted all the i's and crossed all the t's, fine tuned everything until we had a lovely book that was beautiful and informative yet entertaining. The artwork for the book was prepared and shipped to Sri Lanka for printing. Karl suggested that I made a trip to Sri Lanka to oversee the printing of the book in Colombo and explore Galle Fort as well.

Aitken Spence Printing & Packaging in Colombo was very professional in its dealings; its quality printing made the life-like photographs leap out of the pages to arrest attention. The three of us were thrilled with the way the book turned out. Flipping through its gorgeous pages for the first time was so exciting, knowing that we would be the only ones to truly know the amount of effort that went into making this book a reality.

Delighted with our work, we headed to Galle Fort. When I first started designing the book, I did not realise that I would have the opportunity to explore the fascinating Fort first hand, walking through its historic streets and getting to know some friendly faces. You never know where life will take you and it helps to be ready when the opportunity comes a-knocking.

At Galle Fort, I stayed at the award-winning heritage boutique Galle Fort Hotel and was given The Grand Apartment, its most impressive suite. The majestic proportions of the suite came complete with its own private veranda, living room, dining area, grand bedroom as well as a spacious bathroom. Nothing was left to chance and everything in the suite had been carefully curated. The fifteen-foot ceiling high suite, with classic shuttered windows and rich teak floorboards, was furnished with antique furniture, vintage carpets, comfortable chaise lounges as well as an enormous Dutch spiral four-poster bed. It even had a vintage brass telescope in perfect working condition!

Having stayed in such a luxurious suite of beauty and elegance, it is difficult to imagine that this very building, 28 Church Street, had once fallen into complete disrepair. In 2003, Karl and Christopher Ong bought over the property and they invested two years to meticulously restore it to its full glory.

Halfway through the restoration works, when the devastating 2004 Boxing Day tsunami hit, only the sturdy fort and its inhabitants were spared! The hotel quickly became a refuge for many of the local and foreign victims as well as the central command for the UN Marines who were working to reconstruct roads and bridges.

In 2005, Galle Fort Hotel opened its doors to the public and since then, it has received stellar reviews from satisfied guests. In 2007, the hotel was awarded the prestigious UNESCO Award of Distinction for Heritage Conservation, a feather in its cap for much-deserving recognition.

In the hospitality industry, the personal and human experience is of paramount importance to create a warm, memorable stay at any hotel. Charismatic general manager Ewan Taylor made me felt very welcomed. He was extremely helpful in arranging an experienced masseur for a therapeutic full body massage as well as a tea plantation tour for Mark and me – there we met the owner, Anura Gunasekera who autographed a copy of his book, The Suicide Club. There was also a luncheon at Lunuganga Country Estate home to the acclaimed Sri Lankan architect Geoffrey Bawa for Karl and me. 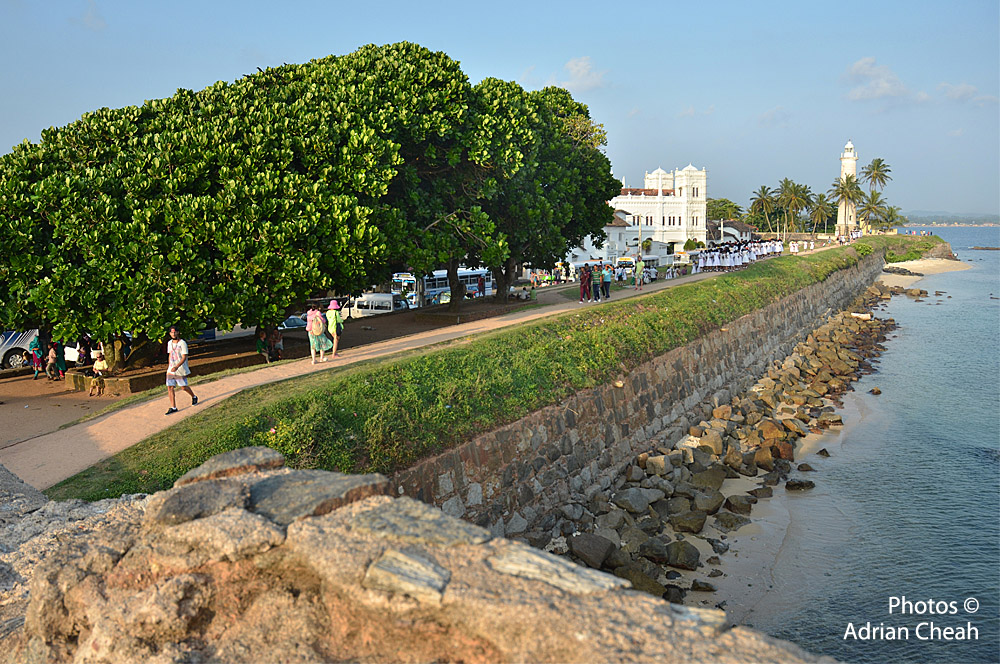 Now allow me to take you on a brief tour of the Fort. Let us start with the harbour, the jetty outside the Old Gate and the Fort. Two thousand years ago, the site where the Fort now stands was home to simple Sinhalese fishing villages. Seven hundred years later, everything changed with the arrival of the first foreign seafarers. The Portuguese, under the leadership of Lorenzo de Almeida, made their first landing at Ceylon (now Sri Lanka) in 1505. By 1524, the Portuguese had begun building Galle's first fort, initiating over four hundred years of colonial domination.

The Portuguese colonists made a grave mistake by underestimating the threat of seaborne invasions, thereby losing control of the Fort to the Dutch. Not wanting history to repeat itself, the Dutch fortified the Fort from both land and sea. They made the new ramparts twenty metres high and seventeen metres thick, running along a three-kilometre perimeter, encircling an area of 130 acres. The outer and inner walls of the ramparts were constructed from hard cordite rock. The space between the two walls was filled with earth and ballast to create an impenetrable barrier, punctuated at the various intervals by fourteen bastions. It was an incredible feat of engineering that has stood the test of time.

To the southeast of the jetty, facing Galle Town, is the round-shaped Black Fort (formerly known as Forta Leza) built by the Portuguese in the 1580s. There were once eight cannons mounted on this bastion.

Above the arched entryway of the Old Gate is the British Coat-of-Arms which replaced the original Dutch insignia in 1796. On the reverse side of the entrance, the original Dutch VOC (Vereenigde Oost-Indische Compagnie) Coat-of-Arms can be found. Fuelled by the lucrative seventeenth-century trade, the Dutch warehouse running almost the entire length of Queen Street was once the most important building in the Fort. It was used to amass an emporium of the VOC's treasures – spices, silk, porcelain and ivory – before they were shipped to Europe.

Opposite the Dutch warehouses is the Court Square, the heart of Galle's legal system since Dutch times. On the far corner of Court Square is Akersloot Bastion, marking the beginning of Hospital Street. The first hospital at the fort was founded by the Portuguese Franciscan friars. The hospital witnessed the terrifying smallpox epidemic of 1786 which killed over 800 people in Galle. It also endured the bubonic plague twice, in 1922 and 1929. 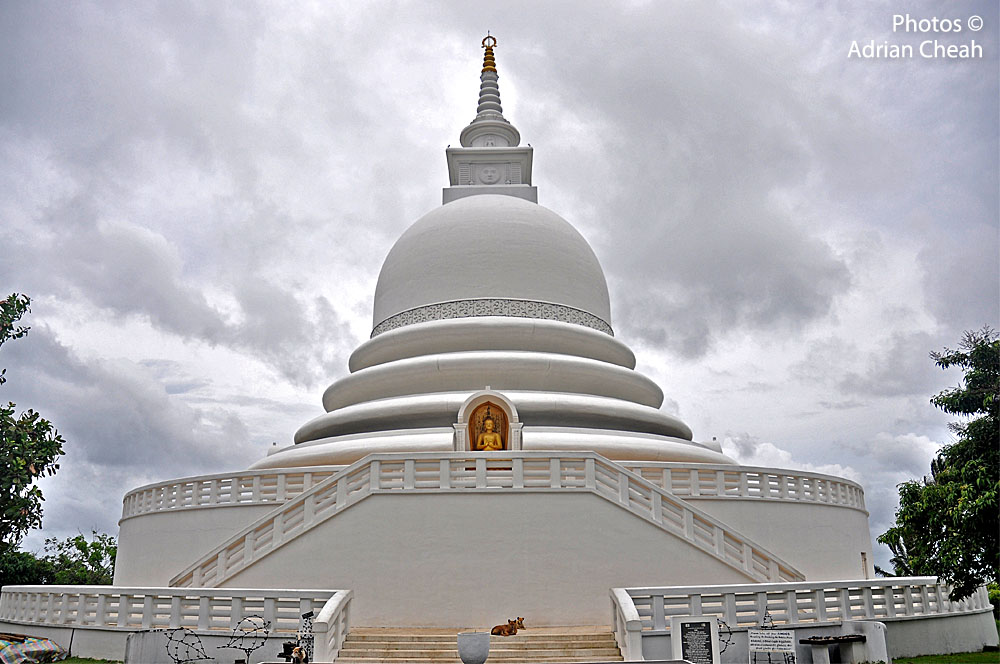 The far end of Hospital Street offers views eastward beyond the port to the Rumassala heartland. The huge white "Peace Pagoda" was initiated by Nichidatsu Fujii, a Japanese Buddhist monk who believed in non-violence.

At the southern end of Lighthouse Street, in Utrecht Bastion, is Galle's second lighthouse. The first one, arriving from Scotland in 1848, was erected on a small bastion to the west, known as Flag Rock. It was, however, razed to the ground and replaced by the second lighthouse in 1938. Until today, the lighthouse guides ships into Galle's harbour.

A stone's throw away from the lighthouse is the white Meera Jumma mosque, the second mosque built in the Fort at the corner of Leyn Baan Street. This mosque is frequented by over half of the population (Muslims) from the Fort. 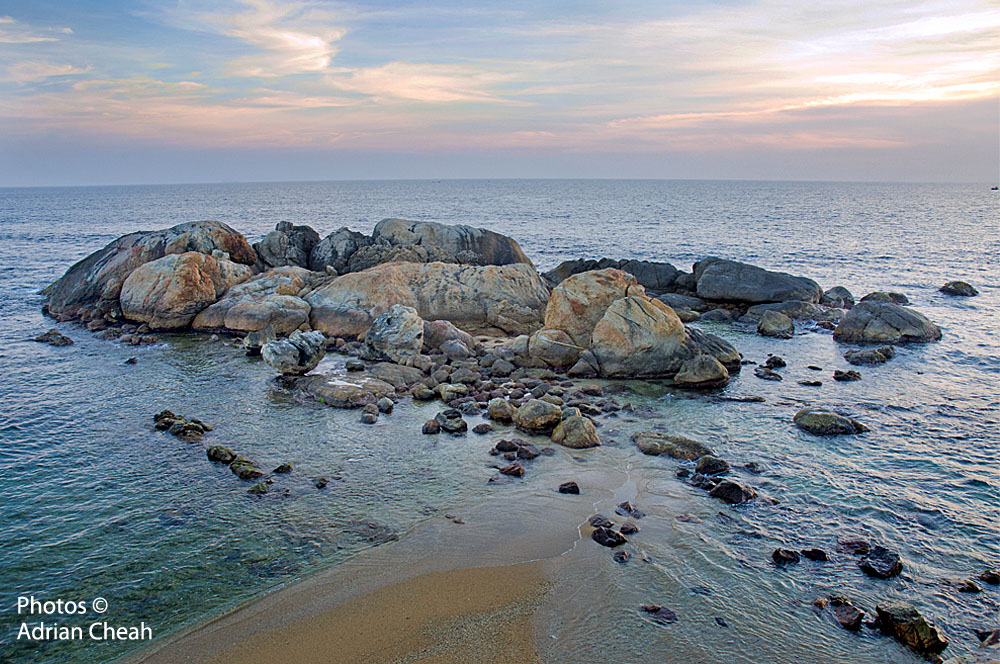 Nearby, the Flat Rock Bastion, enables you to browse the wares of peddlers or watch free-style divers plunge perilously into the sea below. Here, the old Dutch VOC flag flew high. Enjoy spectacular vistas of the Laccadive Sea as well as the crashing waves as they hit the rocky shoreline.

From the bastion, walk along Rampart Street before turning right into Parawa Street. At the end of Parawa Street, turn left to Sudharmalaya Temple.

Sudharmalaya Temple has a white stupa symbolising the enlightened mind. The shrine room houses a large reclining Buddha as well as frescoes depicting stories of his life. Two other smaller rooms containing images of Hindu deities, hidden behind large curtains. The blend of Buddhist and Hindu iconographies is quite common in Sri Lanka.

From the temple, walk up the ramparts passing three bastions – Neptune, Clipperberg and Aeolus – before reaching the Star Bastion. Its solid, impassable walls once double up as a site of the former Dutch prison.

One of the Fort's most striking features is the Clock Tower, which stands sentry over the Moon Bastion to the north of the citadel since 1882. The clock tower was built in recognition of the services of renowned burgher Dr. Peter Antonisz, who aided the inhabitants of the Fort when the bubonic plague struck.

The Main Gate is located between the Sun and Moon bastions.

In 1620, the Portuguese built the sturdy Sao Iago Bastion, which was renamed by the Dutch as the Zon (Sun) Bastion in 1667. Thirty years later, the base of the bastion was further strengthened. The Sun Bastion offers some of the best views of Galle International Cricket Stadium. Walk down Church Street and you will pass the Galle National Museum before reaching Amangalla.

At the time that the Oriental Hotel was opened in 1863, Victorian Galle was a vibrant city at the peak of its glory. Today, it is run under the Aman Resort Group as the exclusive Amangalla. On my second visit to Galle Fort in 2015, Karl, Darian Jotikasthira and I had a scrumptious dinner at Amangalla.

The next building after the Amangalla is the Dutch Reformed Church. Completed in 1755, the church, with typical gables, a high vaulted ceiling and large arched windows, is a landmark building in the Fort. The church still maintained its original calamander wood pulpit, a vintage grand organ, beautiful stained glass panels and honeycombed floor tiles. Part of the floor is also paved with gravestone slabs of the Dutch elite.

Across the road from the post office and the Bell Tower is the former Dutch Governor's House, built in 1683 by Thomas van Rhee. When the British came into power, the building was renamed King's House and then Queen's House when their Governor took residence in 1796. In the late 1800s, the British built a new harbour in Colombo and Galle fell into decline. They sold Queen's House for £15,000.

Continue your journey straight and you will pass the All Saints' Church and Clan House before reaching Galle Fort Hotel, located right at the heart of the Fort.

Thank you for embarking on this virtual tour which would have covered most of the interesting sites at the Fort. However, the experience of savouring mouth-watering cuisine, enjoying cool sea breezes caressing your face, being pampered with rejuvenating massages, falling for glittering gems and creative handmade crafts, can only take place at the Fort. Like the school children below, get off the ramparts when you are there and soak your feet in the ocean. It will make the experience more poignant. 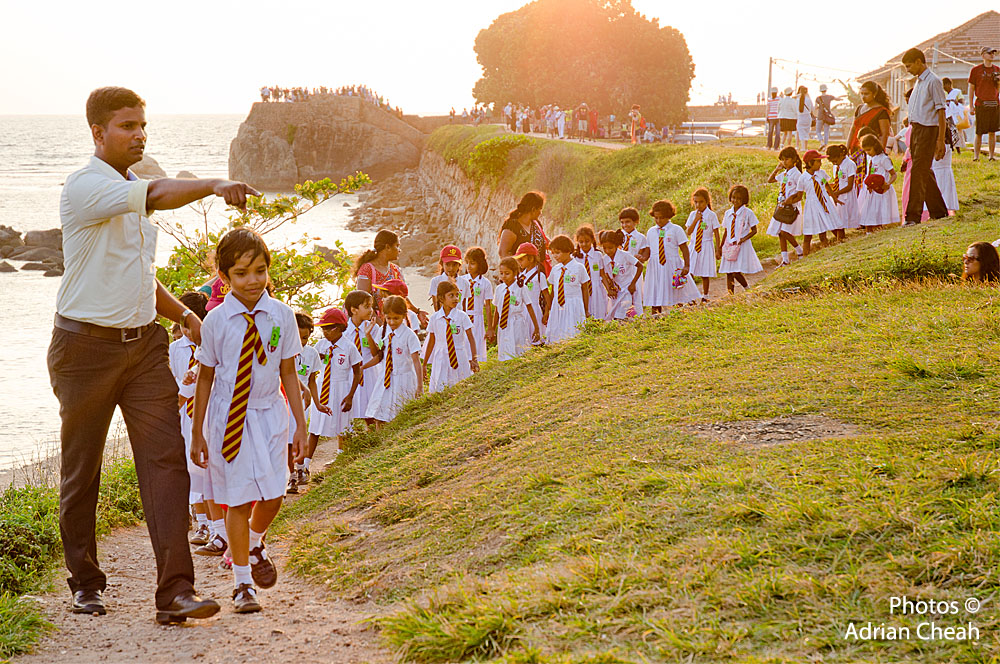 If you like to know more about Galle Fort and its fascinating tales, get a copy of the book available at most bookshops at the Fort. Never forget that in 1988, UNESCO declared Galle Fort as a World Heritage Site.

PS: Many thanks to Karl Steinberg (seated) and Mark Thompson (standing, middle) for the cherished memories I had working on the book and the eventful Galle Fort escapade. I am also grateful to Ewan Taylor (standing, right) for his outstanding hospitality and for going the extra mile. Many thanks to Karl and Darian (in No. 13 t-shirt) for making my returning trip to Galle unforgettable as well.