When I think of sunflowers, the first thing that comes to my mind is Vincent van Gogh's globally recognisable sunflower series. Diego Rivera, Alfred Gockel and Paul Gauguin, master artists in their own right, had incorporated sunflowers in some of their paintings as well but none of them achieved the stellar recognition that van Gogh received from his iconic sunflower masterpieces.

In early December 2019, five of my fellow ex-sixth formers and I visited the sunflower field of Manee Sorn, a popular tourist attraction in Khao Yai, Thailand. It is here that the annual sunflower festival is hosted in December. 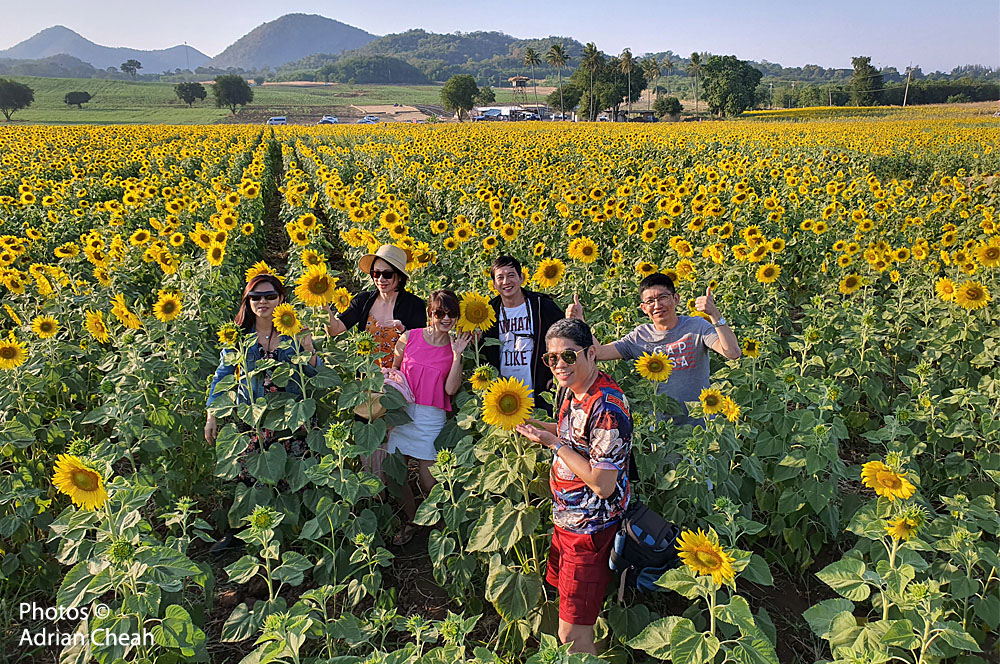 The best time to visit this field would be from mid-November till late January (before the harvest). The 540-rai (213.5 acres) field was a spectacular sea of yellow, 5-feet tall blooms stretching out into the horizon. It was a breathtaking wonder to behold!

Visiting the sunflower field of Manee Sorn, I began to understand Van Gogh's fascination with the mesmerising beauty of the opulent sunflower. In March 1987, his dazzling yellow sunflowers sold for $39.85 million, more than three times the highest price ever paid for a painting at an auction then. Ironically, the artist had once hoped to sell it for a mere $125. Sadly, the Dutch master never sold a single painting in his lifetime.

A young sunflower has a heliotropism (ability to track the sun) circadian rhythm. The flower’s face responds to the stimulus of sunlight, thus following the sun from sunrise to sunset every day, repeating the cycle until maturity. At maturity, as the flower gets heavier during seed production, the stem will stiffen and the mature flower will generally remain facing east. The Greeks have an intriguing story behind this rather peculiar phenomenon.

Although there are various versions of this Greek mythology, I like the following story best. It is of a nymph called Clytia who fell deeply in love with the handsome sun god, Helios, the personification of manly beauty. When Helios took Leucothoe as a lover as well, the jealous Clytia informed Leucothoe's father, Orchamus, about his daughter's affair. Enraged, Orchamus buried his daughter alive. Stricken with grief, Helios abandoned Clytia. She sat on a rock naked, pining for the sun god to return, refusing both food and drink. On the ninth day, she was transformed into a turnsole plant.

Some versions of the story substituted the turnsole with the sunflower (which coincidentally until today, continues to turn its "face" towards the sun). The French word "tournesol" refers to the "sunflower", while in English, the "tournesol" refers to the "heliotrope". By the way, the genus of the sunflower, "Helianthus" is rooted in two Greek words – “helios” (sun) and “anthos” (flower).

We were at the sunflower field in the late afternoon where the setting sun cast beautiful light and shadows across our photographs. It was a breathtaking outing where we happily captured as many photographs as we possibly could. On our way out, we were glad to support a few local vendors selling roasted sunflower seeds as well as various types of crackers and snacks.

Another a-maze-ing experience we had in Khao Yai was at Pete Maze. This was the first for me although hedge mazes and labyrinths have been around for centuries. Ancient Greeks designed and used labyrinths when embarking on spiritual journeys. There would be only one circuitous route to follow. By walking through the meandering passageway, it is believed that the experience forces the body and mind into a state of calm that would lead to peace. 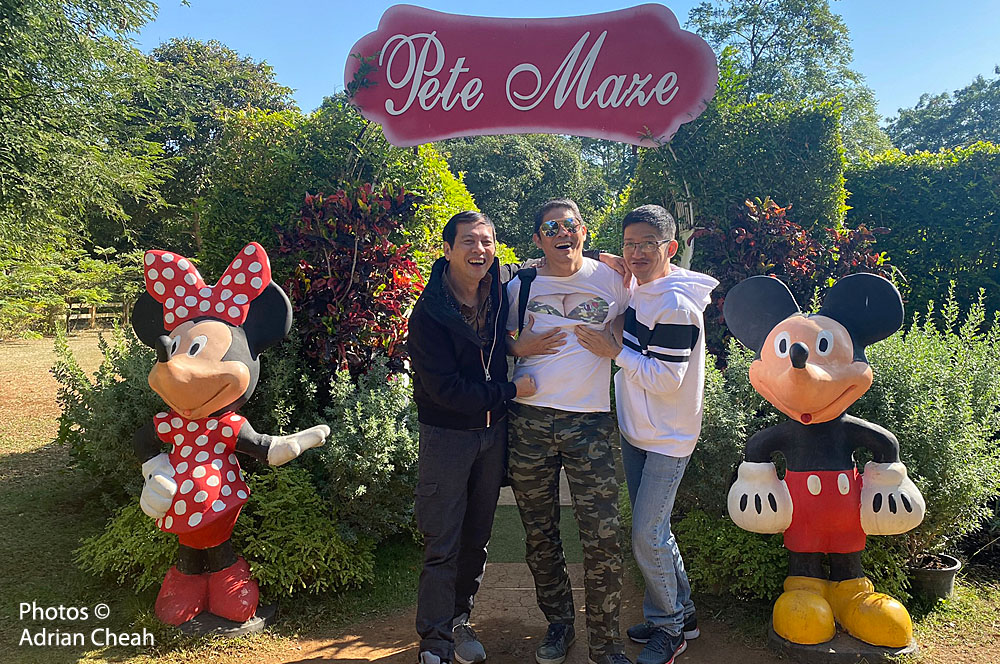 A maze, on the other hand, branches off in many directions; it is lined with many routes leading to dead-ends, some even going back to the point of origin. One popular hedge maze is located on the grounds at Hampton Court Palace in England, occupying a third of an acre. It was commissioned around 1700 by William III, making it the United Kingdom's oldest surviving hedge maze.

According to the Merriam-Webster, both words, "maze" and "labyrinth", are similar as they refer to "confusing networks of passages or channels". However, the two words differ in their origin. The word "maze" presumably comes from an unrecorded Old English word "masian" (to confuse), whereas "labyrinth" could possibly be a pre-Greek word whose derivation and meaning are uncertain. Some have even suggested that it might have derived from "labyrinthos", a Greek word which described any maze-like structure with a single path through it, or the Lydian word "labrys" (double-bladed axe).

The Pete Maze was primarily designed to function not as a challenge but more of a larger-than-life puzzle to explore. The maze is dotted with interesting photo opportunity corners, including a few elevated observation decks for overall vistas of the entire compound. Forget about a central theme as this maze has a "kooky" mix of installations, from Mickey Mouse to Doraemon and from HR Giger's alien monster to a scene from Alice in Wonderland. Getting lost was not the least bit scary but rather entertaining, especially among friends. It was pleasing to recognise and appreciate the beauty of the intricate hedge maze when the kid in us could once again resurface.

At Khao Yai, we visited the Jim Thompson Farm in Nakhon Ratchasima as well. With its flowering fields and sprawling 600-rai (237 acres) property, the farm offered plenty of things for us to see and do. The areas we covered include a giant pumpkin patch, fields growing a variety of organic vegetables and fruits, a blooming sunflower garden as well as a replica of Isan Village, exhibiting the lifestyle of the northeastern way of life, cultures and traditions.

James HW Thompson, better known as Jim Thompson was born in 1906. He was an American architect and art collector who settled in Bangkok after serving as a military officer in World War II.

Thompson was captivated by Thailand and its culture, particularly the art of Thai silk making. He dedicated his entire life perfecting the artistry of Thai silk making and creating an international demand for this exquisite fabric. His skills as a designer and textile colourist created world-renowned fabrics that won a devoted following among interior designers, couturiers and costume designers for both the stage and screen. He single-handedly rekindled the Thai silk weaving industry benefiting thousands of families involved in its production.

In 1967, Thompson disappeared mysteriously while on vacation in Cameron Highlands, Malaysia. Although there are many theories about his disappearance, the fact remains that they are mostly all speculative and no one really knows what exactly happened on that fateful day in March. Wearing many hats, the legendary "silk king" was also once a former American intelligence officer.

Despite his disappearance, Thompson's company has continued to flourish until today carrying on his vision of quality and innovation.

One of the goals of Jim Thompson Farm is to create awareness of the value of ancient and beautiful northeastern culture and tradition. The farm supports eco and cultural tourism and is accessible to the public from December to January. The remaining months are focused on agricultural production.

Art installations were also showcased throughout the fields of the farm, created by local conceptual and contemporary artists.

We concluded our visit to the farm at Jim's Market. Various kinds of fruits, vegetables, trees and flowers, as well as Jim Thompson's fine silk products were on sale. We walked away contented with our purchases.

When it came to feasting, we got off the beaten track and sought the assistance of our local van driver to recommend some authentic spots serving mouth-watering Thai cuisine. The night markets and street food destinations were rewarding venues that we explored as well.

We were spoilt for choice as countless delicious spread were on offer. The sheer freshness of the ingredients enhanced the quality of the dishes; these dishes were often flavoured with generous helpings of fresh herbs and spices. What makes Thai food simply delectable is its unique yet distinct balance of sweet, sour, spicy, salty and umami. The meal times were always a rewarding affair, enjoyed at a leisurely pace among friends and concluded with amazing Thai desserts.

Besides Thailand's all-time-favourite mango sticky rice and tub tim krob red ruby desserts, we also visited the Chocolate Factory, this time to indulge sinfully in of all things chocolate. Many of the tempting recipes here were created by internationally renowned French pastry chef, Eric Perez.