Church of the Assumption, among Penang's historical landmarks

George Town, located in the heart of Penang, has perhaps one of the most diverse religious communities in Malaysia. Here, almost every religion has its own distinct religious architectural abode to serve believers.

Find out more about these places of worship by joining a guided heritage trail of George Town (especially one that goes through the Street of Harmony). This provides an insightful outing exploring religious diversity, surprisingly all within a short walking distance from one another. Although the Street of Harmony covers Masjid Kapitan Keling, Sri Mahamariamman Temple, Goddess of Mercy Temple and St. George's Church, one should extend the trail a little further and visit the Church of the Assumption as well.

A quick glance through the history of the church

As you enter the Church of the Assumption, a plaque located on the left wall lists the names of priests who had served the church since its early days. First on the list is Monsignor Arnold Garnault, 1786-1792. In 1786, the first Catholic community in northern Malaya at Kuala Kedah landed in Penang on the eve of the Feast of the Assumption. Together with Bishop Garnault, they built a humble wooden church on Church Street and named it Church of the Assumption. Bishop Garnault's presbytery was on the adjacent street (which was eventually named Bishop Street).

In 1802, a brick building with a tower replaced the wooden structure and served the Catholic community till 1858. Father Denis Jourdain was the last priest to serve there.

The church then relocated at a building at Farquhar Street. In 1860, the current structure of the church was built by Father Claude Manissol. A year later in October, the first mass was celebrated in the then newly built church that had a sitting capacity of about 1,200. Father Manissol is buried in the church marked by an inscribed marble grave slap on the floor.

The church underwent a major renovation in 1928 when two wings were added. In 1955, the Church of the Assumption was elevated by a Decree of the Vatican to the status of the Cathedral of the Diocese of Penang. The sanctuary was then renovated for the setting up of the seat for the first Bishop of Penang, the Right Reverend Monsignor Francis Chan.

From 1 September 2016, the church closed its doors for 14 months for a RM2.5 million restoration job. The restoration was completed in time for the re-dedication of the restored church on 1 January 2018.

A union of love

My parents were married at the Church of the Assumption on the morning of 27 December 1952. It was here that they pledged their love for each other – "...to have and to hold from this day forward, for better, for worse, for richer, for poorer, in sickness and in health, until death do us part..." The priest who solominised their marriage was French priest Father Georges Auguin. It must have been a lovely mass as the choir belted out heavenly hymns accompanied by the towering grand pipe organ.

Sweet, demure-looking Mum was only 18 then while dashing young Dad was 26.

A lunch reception was held at the majestic Shanghai Hotel at Gurney Drive followed by a grand wedding dinner at a restaurant at New World Park. Dad was a young thriving businessman then and according to Mum, the venue was filled to the brim with many of his business associates and their families, feasting and having a ball.

The Church of the Assumption has always been a special place for my parents, perhaps because it was here that they embarked on the adventurous journey of life together. Today, Mum looks back at 54 precious years they had, nurturing and loving eight children, 20 grandchildren and nine great-grandchildren. This year marks their 69th wedding anniversary and although Mum misses Dad dearly, she chooses to count her blessings.

Located at the corner of Farquhar and Love Lane, this stately, grey building has a pair of life-size white marble angels, each holding holy water in a shell which greets you at the entrance of the church.

These two rows of chairs at the entrance of the Church must have an interesting tale to tell. At the end of each armrest is the miniature head of a bald man.

The interior is adorned by beautiful stained glass panels, life-size statues of saints and the Blessed Virgin Mary, stations of the cross wall hangings and an authentic pipe organ. The church still serves the Catholic community in Penang with masses being celebrated on Saturdays and Sundays.

Right in front of the church, after the porch is a dome-shape grotto. Flank on the left and right of the statue of Our Lady are two pieces of stained glass panels designed by me. They were donated by Jennifer Khaw.

The church grounds also house the Roman Catholic Penang Diocesan Museum, presenting the history of the Church's missionary activities with some interesting artifacts and memorabilia. There is also an art gallery showcasing paintings of Father Joseph Reutens.

Located on the first floor of the church is a grand pipe organ that was erected in the church in 1916. Commissioned by Fr. Louise Duvelle, the parish priest then, this pipe organ has to be one of the oldest surviving instruments of its kind that is still in working condition.

Although the organ was built in 1914 by the firm of Morton & Moody of Oakham in England, it only arrived in Penang two years later. This was due to the constraints of shipping the organ during the First World War.

Let us take a close look at the pipe organ. It is made of oak, pine and mahogany and boasts 640 pipes made of lead and zinc. It is a musical instrument that produces sound by forcing pressurised air (referred to as wind) through a series of pipes. Organ pipes sound when a key is depressed on a keyboard, allowing the wind to pass through one or more pipes from a chest beneath them. Because of its continuous supply of wind, the organ is capable of sustaining sound for as long as a key is depressed, unlike other keyboard instruments such as the piano, whose sound begins to decay immediately after the key is being struck.

Constant maintenance and restoration have been carried throughout the years to ensure that this beautiful musical instrument faithfully serves the congregation. An experience organist can render both sacred and secular music; when coupled with the vocals from a good choir, uplifting music resounds through the church, especially during Christmas vigils and celebratory masses.

What is the feast of the Assumption?

This doctrine was dogmatically and infallibly defined by Pope Pius XII on 1 November 1950 in his Apostolic Constitution Munificentissimus Deus. In those denominations that observe it, the Assumption is celebrated on 15 August. 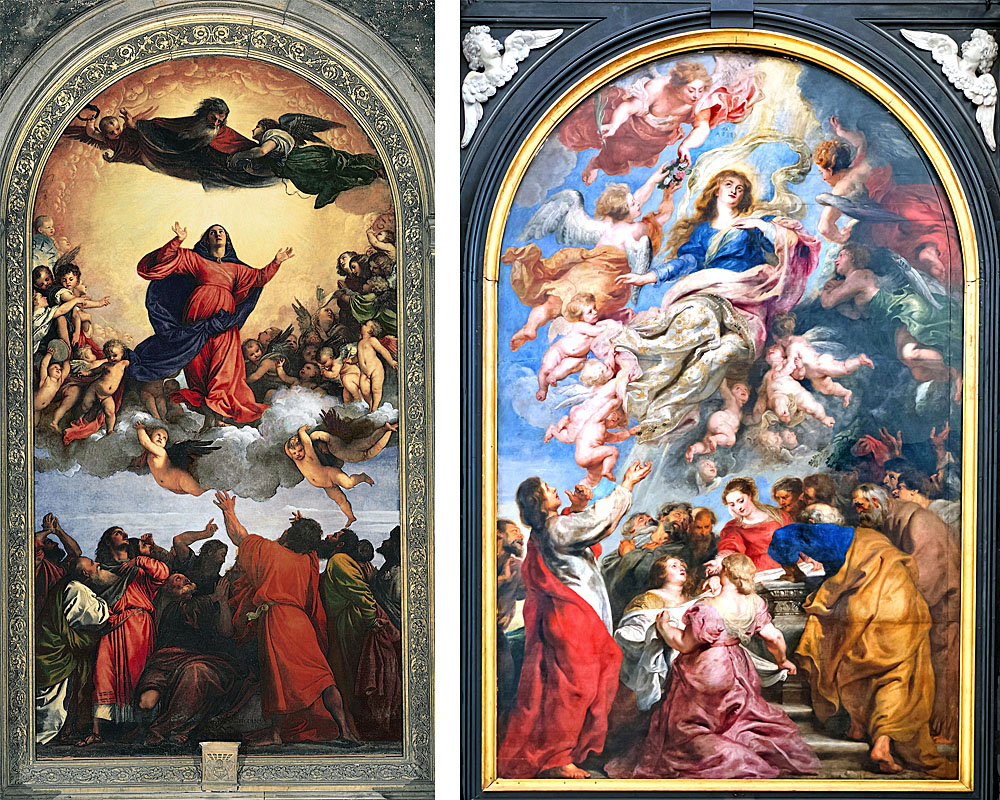 Here are masterpieces painted by two highly influential artists of their times on the Assumption of Mary.
Left: Frari Assumption (The Assumption of the Virgin), Titian, 1515–1518; this painting is on the high altar of the Basilica di Santa Maria Gloriosa dei Frari in Venice.
Right: The Assumption of Mary, Rubens, 1626; this altarpiece is in the Cathedral of Our Lady in Antwerp, Belgium.