Cheong Fatt Tze was as eclectic in adapting Western ideas to business and politics as he was in designing the architectural features of his home. The towkay's 38-room abode sits at a strange diagonal to Leith Street. Hauntingly beautiful, the house is only one of two, which were built in this grand style, left outside China, and, as such, provided the atmospheric location for the 1993 movie Indochine. Saved from destruction in 1990, the Straits-eclectic-style mansion was bought and authentically restored over six years by Laurence Loh and Loh-Lim, of Laurence Loh Architects, a local firm specialising in heritage conservation work. 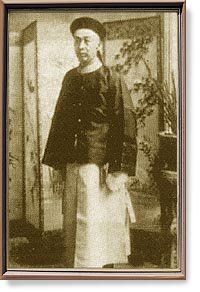 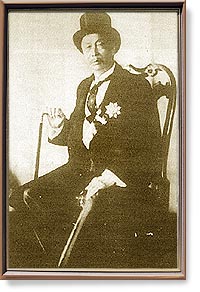 Two photographs displayed in the mansion symbolise Cheong Fatt Tze's uncanny ability to bridge the gap between East and West. In one, he poses rather solemnly in Chinese mandarin dress as though waiting for an audience with the Empress; in the other looking capable of launching into a Fred Astaire dance number, he wears a tuxedo and top hat with sophisticated panache.

Loh-Lim, a trained psychologist, has devoted much of her time in these past years to bringing Cheong Fatt Tze's house back to life. Captivated by intriguing personality, Loh-Lim senses the towkay's chi – what the Chinese call collective energy or spirit, or, more colourfully, dragon's breath – inside the mansion. Energetic, attractive and with a lively sense of humour, Loh-Lim gives an informative tour of the mansion, peppered with witty anecdotes about its former owner.

The millionaire's stranger-than-fiction life story could compete with any best-selling novel. "It is a rags-to-riches saga,"she relates. Cheong Fatt Tze, a Hakka born in 1840 in Tai Pu, Guangdong Province in South China, left his home at 16 to seek his fortune with "nothing but the clothes on his back". From toiling as a humble water-carrier in Java he rose to become a powerful shipping magnate and financier with business interests throughout South-East Asia. At the height of his career in the 1890s, when the construction of his home began, he was Consul General for China in Singapore, a director of China's railways and of its first Western-style bank. Dubbed "China's last mandarin and first capitalist", the tycoon also advised China's Manchu Dowager Empress Cixi. After the Manchu Dynasty fell, Cheong Fatt Tze became an economic adviser to the Republican Government, travelling to New York to seek finance for China's development. He was scheduled to meet his Western counterpart, Rockefeller, the year he died. A true innovator, he was dedicated to modernising China by adopting the best Western ideas. He extended this interest to his family life, giving his sons, who were born in Penang, a Western education at the local St. Xavier's Instituition.

In his many encounters with the West, Cheong Fatt Tze coped with racial prejudice in his own inimitable way. Once he booked a trip on a Western shipping line and was refused first-class accommodation because he was a Chinese. Determined to travel in style, Cheong Fatt Tze was granted a first-class cabin when he threatened to buy the entire fleet. More Oriental potentate than Westerner in his domestic life, the magnate lived on a grand scale with homes throughout his empire to accommodate himself and his eight wives, six sons and numerous daughters. The Penang residence was his principal and favourite because wife number seven, his most beloved, lived here as well as wives number three and six. "You might ask if wife number seven was the favourite, why did he have a number eight?" says Loh-Lim, then answers her own question, explaining: "He had to stay longer than he had expected in Shanghai at one point, and got lonely". She shrugs at the inevitability of wife number eight.

Although fond of Western concepts, the towkay embraced the ancient principles of feng shui when building his home, which explains its odd position in relation to the street. Loh-Lim says it was most important for a man of his stature to have the correct feng shui to ensure continued success. Geomancers worked out the proper alignment so that all wind and water flow lines were in close harmony with nature. Rainwater was brought into the house through large pipes in the walls, and kept inside as long as possible before flowing out again. The front door still faces the sea and the building, with hills behind for protection, is on an incline, a position called "riding the dragon's back".

Penangites, accustomed to the mansion being slightly askew, were somewhat taken aback, however, when it was repainted in its original deep-blue colour. According to Loh-Lim, even old-time residents had forgotten that in the 19th century three quarters of Penang's houses were indigo-blue and the rest a limewash of ochre-yellow. It has been known as the Blue Mansion since. The feng shui alignments proved auspicious for the towkay who made ever more prosperous business deals in his elegant front hall, adorned with geometric floor tiles and art-nouveau stained-glass windows imported from England. While tea was served to business colleagues, wives number three, six and seven, plus several daughters, may have peeked at guests from behind a fantastic gold filigree screen, now restored to its former glory.

The Lohs are dedicated to authentic restoration, which demands extensive research on the house and period, as well as training or finding skilled craftsmen able to use old techniques and tools. Four elderly carpenters, discovered in Penang, took over three years to repair by hand all the woodcarving on the timber beams and shutters. Skilled workers from China restored the fantastic Chien nien mosaics rarely seen in such abundance in private houses. This ceramic shard, a Hokkien art form, decorates the gable ends, doorways, and edges of the tiled roof and the verandahs like mantle of rich embroidery. Loh-Lim picks up a pair of pliers to show how over 12,000 coloured pots were snapped into small pieces and intricately pasted together to form vivid patterns and mythological creatures. Then she progresses into the main court-yard, the largest of five, framed with eight Corinthian columns and a balcony of cast iron from MacFarlanes of Glasgow, combined with Chinese timber lattice work and wood-carved, gilded doors.

"Here," Loh-Lim points to the middle of the courtyard, "is the place where Catherine Deneuve was laid on the couch after being rescued from the opium den in the film Indochine." Most of the scenes depicting Hanoi were shot here for the Academy Award-winning film based on the withdrawal of the French from Indochina, now Vietnam. The film crew found Hanoi too difficult, according to Loh-Lim, so spent four months filming in Penang, which had the perfect architecture. The film brought some publicity to the Blue Mansion, but there were drawbacks. Loh-Lim sadly points out traces of red on the surrounding walls. "Red," she says,"is never used in Chinese homes, but the set designer insisted. He promised the paint would be easy to remove. As you can see, it wasn't and trying to obliterate it cost us a lot of time and money."

She moves on to a side wing of the house and explains that if Cheong Fatt Tze was slightly displeased with a family members, the object of his disgruntlement would be moved to a room here. In what must have been a tumultuous menage, of wives, concubines, children, distant relatives and servants, Cheong Fatt Tze maintained order by room assignments. Current favourites always resided in the centre of the mansion toward the front. Those a bit out of favour were pushed into one of the wings. If the tycoon was really angry with an occupant, it meant exile across the road in the servants' quarters. Now, far more salubrious than when the banished awaited their return to favour, the servants' quarters have been converted into 20 Leith Street, a restaurant and bar, and Jaipur Court, a North Indian restaurant.

Even into old age, Cheong Fatt Tze continued to cut a dash in Penang with his generous philanthropy and fast-paced lifestyle, fathering his last son in 1914 aged 74. On his death in 1916, Dutch and British authorities ordered the flags to fly at half-mast to honour this legendary figure. After his demise, the saga of the house continued. Loh-Lim believes the tycoon plotted his mansion's survival. Unlike his Hakka friends nearby, who favoured the trendy Anglo-Indian bungalows, Cheong Fatt Tze purposely built an old-fashioned Chinese house that would be difficult to sell. Prospective buyers certainly would have cooled at the prospect of lighting oil lanterns or using chamber pots. Blueprints had been drawn up for indoor plumbing, but never executed, perhaps by design. In addition, his will stipulated that his property could not be sold until the death of his last son. Over the years, the Blue Mansion fell on hard times as the trustees of the estate provided little money for its upkeep. When room were rented out, the mansion slowly began to crumble. Because of the primitive lighting, large amounts of electrical wiring were rigged up on the outside of the house; walls were blackened from cooking with charcoal and gas; clothes lines draped form intricate carvings and the tycoon's once-elegant halls became a racetrack for tenants' motorbikes.

When Cheong Fatt Tze's last son died in 1989, the mansion seemed certain to be lost. But the towkay triumphed when the Lohs succumbed to the charms of his, by then, derelict home. Their purpose in resuscitating this venerable mansion was to help enrich Penang's cultural heritage. Loh-Lim, a fifth-generation Straits Chinese, to whom the mansion has become a way of life muses: "Perhaps Cheong Fatt Tze's chi made us save his mansion from the bulldozes."