Merdeka – the National Day of Malaysia 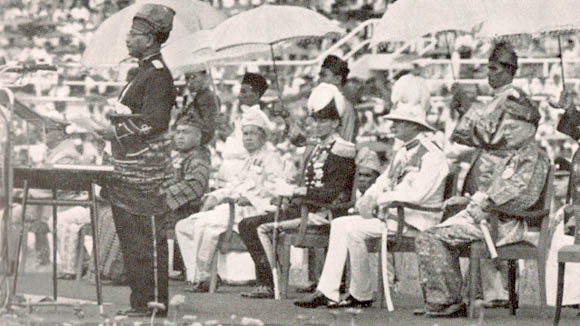 In 1956, the then Prime Minister of Malaysia Tunku Abdul Rahman Putra Al-Haj led a delegation to London to hold talks with the British Government concerning independence for Malaya.

The Malayan delegation, comprising of four representatives of the Malay Rulers and four Alliance representatives, convinced the British Government to set a date for independence: 31 August 1957.

And so it came to pass that on the eve of 31 August 1957, at the Selangor Club Padang (now known as Dataran Merdeka or Independence Square), the Malayan flag was hoisted to replace the Union Jack. Early the next morning the Tunku read the Proclamation of Independence at the historic Merdeka Stadium. On both occasions, Tunku's shouts of Merdeka! were joyously echoed by thousands of Malayans who were there, and the millions who followed the proceedings through the mass media. Malaya had officially gained independence from the former colonialists and became known as the Federation of Malaya, to be followed in 1963 by a change in name to the Federation of Malaysia. And every year since that momentous event in 1957, Malaysians of all races proudly celebrate the anniversary of their independence.

Malaysia has come a long way since then. After almost half a century of progress, development and improvement, the country has become a role model for other developing countries, and shown that people of different cultures and religions can live and work together while maintaining their unique identities and their own traditions and customs. On special occasions like Merdeka Day, the many races of Malaysia proudly don their traditional costumes and gather at various venues around the country in celebration of freedom, self-determination and unity.

The centre for National Day celebrations rotates around the states of Malaysia. Festivities would start the night before with an open-air concert at the chosen venue during the 'Merdeka Eve Celebrations' with popular Malaysian singers and celebrities.

To mark the occasion on the morning of Merdeka Day, the main event usually begins with a spectacular parade down at the preselected venue with His Majesty The King, the Prime Minister, and other government leaders joining the mammoth crowd. Each state will be represented, as are the many ethnic groups that comprise multiracial Malaysia. The National Flag will be flown throughout the country, at office buildings, private homes and on vehicles. State shows, competitions and exhibitions will also be held in all states.

"Let there be spaces in your togetherness", said the Lebanese poet Kahlil Gibran. "Sing and dance together and be joyous," he continued "but let each one of you be alone." In his wisdom, the poet was referring to the importance of uniqueness and individuality, rather than isolation. Sensing this, the country's top leaders have never failed to stress the importance of being proud of your heritage.

The doctrine of individualism in unity has made Malaysia that much more special in the eyes of the world. Rather than put all the different cultures and customs in a melting pot and let everything fuse together, it is the rakyat's celebration of each other's uniqueness that has made them, and their country so successful. It's a win-win formula.

And when they gather together on independence day, Malaysians are reminded of their roots and how they came to be what they are today. The next time you take out a RM50 banknote to pay for something, just note that the historic declaration of Malaya’s independence with Malaysia's first Prime Minister, Tunku Abdul Rahman Putra Al-Haj is featured on it as a constant reminder.